The Evolution of Pequods Pizza

Pequods Pizza In Lincoln Park has emerged as one of the highest rated and popular Deep Dish Pizza places in Chicago. It’s known for a unique crust, and a unique taste. To understand the origins of the restaurant and the recipe, we must track the story of Burt Katz, and how Pequods has become everything it is today.

Pequods Pizza. A staple of Chicago’s historic deep dish pizza. Known by many throughout the city, wanted by just as many, it is a deep dish pizza place like no other. Chicago has long been home of the famous stuffed, or deep dish pizza, boasting famous establishments such as Giordano’s, Lou Malnati’s, and Gino’s East. But for many northsiders of Chicago, residents of the Lincoln Park community, and local students of the nearby DePaul University, Pequods reigns supreme. To understand what makes the restaurant as well as the food they serve so appealing requires a little work however, and a look to the past.

In 1963 Burt Katz, who was born in Chicago’s Wicker Park, bought into a pizza joint called The Inferno in Evanston, Illinois, a suburb of Chicago. For the first time, Katz introduced a new kind of pizza to the Chicago area consumers, that of the caramelized crust. The Inferno was the first place he would own, but it would be far from the last. Burt enjoys employing his intellectual and literary side in naming his restaurants, the Inferno being a reference to Dante.

He sold the The Inferno in 1965, which has been closed for countless years, and opened up Gullivers, a tribute to “Gulliver’s Travels”. His original Gullivers is still located at 2727 West Howard Street, in Chicago’s Rogers Park. He would go on to sell Gullivers, and enter into the business world. He would not emerge again into the pizza industry until 1971.

In 1971 Burt Katz was sick of the white color world of business. After a confrontation with his boss, Katz quit his job. He still needed money and a job however, with wife Sharon and three children to take care of. So, turning back to the pizza industry and the unique caramelized pizza he had created years before, he opened the original Pequods in Morton Grove, another suburb of Chicago. He named it Pequods after the whaling ship in “Moby Dick.” The original, is still located at 8520 Fernald Avenue. It’s original logo was just a whale, although it has since been modified to be a whale wearing a thong.

Katz however does not own the Morton Grove Pequods, or the newer Lincoln Park Pequods that is the focus of this piece, located at 2207 North Clybourn Avenue. He sold Pequods in 1986 to Keith Jackson, who still owns the restaurants today. Katz simply says he burned out at Pequods, but of course, he didn’t stop there.

Always changing his pan-pizza recipe from place to place, Katz finally opened up Burt’s Place in suburb Morton Grove, which he still owns and operates with his wife Sharon at 8541 Ferris Avenue. The pizza at each establishment that Burt has left his caramelized mark of genius is noticeably different, as his recipe was different at each place, in addition to changed these restaurants have made since Burt’s exit. One thing that hasn’t changed however since he opened Pequods in 1971: His Beard. Burt hasn’t shaved since he quit his job in 1971. 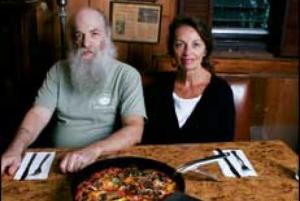 Burt and Sharon Katz. Courtesy of Time Out Chicago

So when DePaul students are chowing down on Pequods pizza, and enjoying the blackened, but not burnt, delicious and signature caramelized crust at Pequods, they have Burt Katz to thank. Tracking all of his pizza moves chronologically would go as the following, to sum it all up.

What about the where? All of these pizza locations are spread out around the Chicago area, with the exception of the original Pequods and Burt’s Place. Burt actually opened up his newest restaurant right up the street from his original Pequods, and there is no love lost between Burt and Pequod’s owner Keith Jackson.

Pequods Pizza in Lincoln Park is located right across the street from the Webster Place movie theaters. The pizzeria doesn’t need the help though from a business standpoint: Not only is the place always full and bustling with action, it is a bar. As a matter of fact, from the outside, and even on the inside, Pequods in Lincoln Park could easily be mistaken for a hole in the wall pub. Don’t let its appearance fool you, or the dimly lit room with flashy signs and plasma TV’s on the walls. The restaurant is dark and quaint, with the bar taking up much of the first floor space, but there is also much more proper seating in the upstairs. 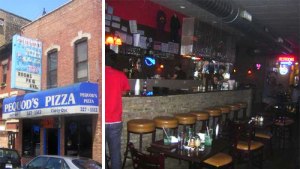 A look at Pequods from the outside, as well as a look at the bar inside the restaurant. I do not own this photo.

Pequods: The Business and the Customer

From a business standpoint, the place is a goldmine. Not only do they do a ton of business at the actual restaurant, resulting in long wait times, they do an incredible carry out and delivery service. They always have at least one or two employees dedicated to carry outs, always have a smiling host or hostess ready to greet you and help you, but they get people in and out efficiently. Because the pizza takes 30-45 minutes to make, you can call ahead to get your pizza cooking, or give them your pizza order while you wait for a table. On top of all this, it is located in the Lincoln Park community of Chicago, known for it’s wealthier residents who can afford big expensive deep dish pizza’s.

Keith Jackson bought Pequods in Morton Grove in 1986 from Katz for a “few hundred thousand.” Jackson couldn’t remember the exact number but pointed out that it was for the business as well as the building. Jackson would go on to buy the building in Lincoln Park in 1991 to open the second Pequods location on Clybourn. When asked if there was any bad blood between himself and Burt Katz, Jackson, a radiant 60 year old with blue eyes and a peace and love mentality, merely said “let bygones be bygones.” Jackson did add however that it was “disappointing that he opened up Burt’s place right up the street from our Morton Grove location.” Jackson understands that it’s a competitive business  and that despite this fact his business does very well, especially in the booming Lincoln Park community.

If you were to google “Deep Dish Pizza Chicago” Pequods will not show up on the front page, not being one of the famous establishments on par with Giordanos or Gino’s East, but you need only click on the google map to see more deep dish pizza options. Google provides Zagat ratings based on Zagat reviews rated and reviewed by customers. Here are some notable Zagat rankings. Each ranking is based on a rating out of 30 possible points.

So looking at some of the more famous/notable deep dish restaurants in Chicago, Pequods is a clear front runner. Without going into a discussion of who has the best deep dish in the city, it is safe to say that Pequods is up there, although because there are so many different points of views and opinions it is impossible to say.

So what about the actual pizza? What makes the pizza and the crust so good. Burt Katz invested the idea of carmelizing the pizza crust, with no culinary training, resulting in a chary black, but not burnt tasting crust with a hint of cheese. It is not only unique, but the tastiest part of the pizza. To achieve the carmelized crust you need only follow a few simple steps, yet the process is still delicate and flexible. All you need to do is line the pie with cheese bits, let it bake in a deep pan until it is black, and there you have it. On top of this is piled huge ammounts of all your favorite ingredients.

Pequods inherited the Katz recipe in 1986, but has made it’s pizza unique from the 1986 version. It has tweaked the pizza over the years, but ultimately made the sauce much sweeter, and put more actual substance into the pizza, resulting into the mountain of delicious stuffed pizza you can see me posing here with.

My friend Erin and I posing with a Stuffed pizza from Pequods. The pizza in this picture is a Large Pan Pizza, which is 16 inches.

As far as what local Chicagoans and DePaul students think of the pizza, it is among their favorites, easily.

Erin Prak, Chicago resident and recent Middlebury College graduate, described Pequods as ” A great balance of heartiness and satisfaction, that’s not too heavy, making it a great meal to share during a fun night out with friends.”

DePaul junior Max Harkavay simply said its the best pizza he’s ever had in his life.
Pequods does offer other things besides pizza, such as a thin crust, and sandwhiches. Nicanor Mandin, a UIC senior loved the pan-pizza, especially the individual lunch special. From 11AM-3PM Monday-Friday Pequods offers a 7 Inch personal pan pizza with a topping and a soda/draft beer for the price of $4.95, making it an appealing offer to anyone not looking to spend a fortune on good deep dish pizza. Still, Mandin often gets the Italian Beef sandwich as well, which he says is one of a kind.

“Not only does the beef explode with flavor, it is combined with the perfect ratio of beef tenderness to bread crispness.” Mandin describes.